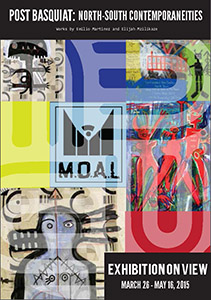 Community Folk Art Center began its Spring 2015  with an exploration of Contemporaneity, through a re-examination of the meaning of “Sambo: the Aesthetics of Jean Michel Basquiat.” The aim here is not to center the work of the “contemporary” art icon that is “Basquiat” but to rather illuminate the form and style he championed in order to study the province of Contemporaneity. This exercise is however not rooted in western theories of the contemporary and its post postmodern matrix. Rather, it proposes “post Basquiat” as an opportunity to explore a style that expand far beyond the limits of the western world.

Post Basquiat: North-South Contemporaneities tries to locate the particular story of form and style within the broader context of the rise of the Global South; articulating connections and convergences rooted in socio cultural realities that refuse to be peripheralized. These connections and convergences then become key concepts of Contemporaneity.

Speaking of the evolution of art in the unfolding of history has already been problematized; stained by hegemonic discourses of colonization and imperialism. What is left is a possibility of arguing about its accessibility through a counter narrative that is the rise of “south-South” expressive productions. These provide us with attempts to dismantle the “contemporary’s” aspirations of legitimizing from above and using these as standards for all other expressions.

Seen with these lenses, Post Basquiat: North-South Contemporaneities articulates a knowledge emerging from below and vehicles processes that oppose various hegemonic models created by the Western contemporary. In this project, the use of the word “Contemporaneity” is an alternative to both concepts of western modernity and contemporary— especially the latter which does not connect with any specific time period but seems to envelop whatever is developing. Problematizing ‘Modernity’ and ‘Contemporary’ allows us to see their absence of historical specificity accompanied by a discursive rhetoric that is a persuasive discourse promising an illusion of progress, civilization and happiness.

Post Basquiat: North-South Contemporaneities therefore is allied with assertions by theorists of decoloniality who describes modernity, especially its darker side, as another form of “coloniality.” For these theorists, “coloniality” is something that still persists today, and in opposition to the processes of decolonization.

The distinguishing features of decoloniality, especially those which move outside of dominating aesthetic systems and which are also manifest in the Global South, may also apply, at least in part, to the works of the artists assembled in this exhibition.

If attitudes in the West’s contemporary continue the Modernist project of hegemony, it is becoming increasingly important to ask how great a share a given space really inhabits in the global exchange of ideas, and to what degree this exchange reflects the polarization of the world into Global North and Global South.

While the concept of the plurality of narratives (Hall) can be connected with the idea of the unfinished nature of the historic avant-gardes, it should, however, be linked first and foremost to the unfinished project of decoloniality. The production of local bodies of knowledge, which include the genealogies of local avant-gardes, is a precondition for establishing any “planetary negotiations” on an equal basis. We could relate such thinking to the notion of “transmodernity” put forward by the proponents of decolonialist theory (Quijano). The decolonialists oppose the concept of transmodernity to the Western concepts of postmodernity and altermodernity, as well as to such notions as alternative modernities, subaltern modernities, and peripheral modernities.

Post Basquiat: North-South Contemporaneities argues that all of these concepts still maintain “the centrality of Euro-American modernity or, if you wish, assume one ‘modernity of reference’ and put themselves in subordinate positions.”

Instead, Post Basquiat: North-South Contemporaneities argues that it would be very mistaken to suppose that artistic emancipatory ideas come only from the Western world. No single place can claim exclusive rights to emancipatory knowledge, which is important to the entire planet.

Martinez explores relationships among memory, history and art making through mnemonic devices to demonstrate the importance of visuals and related expressive culture to the formation, development and remembrance of people and political relations. His works demonstrate that way before the conquistadors, the recounting of history has been a specific and highly valued form of intellectual activity among first peoples and that visual representation has been a primary vehicle for the making of histories of their humanity and center/periphery relations.

La Cuina and Instinct are useful vehicles for memory. They operate through representation. “Images do not simply encode prior mnemonic functions… [They] posit a dynamic of mnemonic processing”. On first knows one’s own body in “pieces and …disassociated limbs and absent center” all defined by sensation and needs. Indeed, one can never see one’s own face, except in a mirror. But remember, the mirror’s “essential perplexity” of reversal and its “see through effect,” fir identification of the “I” simultaneously generates the other. The paradox is across its threshold. La Cuina and Instinct then become “both mode and object of knowing,” for the self is “constituted outside its physical being by its image”

La Cuina and Instinct are useful vehicles for memory. They operate through representation. “Images do not simply encode prior mnemonic functions… [They] posit a dynamic of mnemonic processing”. On first knows one’s own body in “pieces and part…disassociated limbs and absent center” all defined by sensation and needs. Indeed, one can never see one’s own face, except in a mirror. But remember, the mirror’s “essential perplexity” of reversal and its “see through effect,” fir identification of the “I” simultaneously generates the other. The paradox is across its threshold. La Cuina and Instinct then become “both mode and object of knowing,” for the self is “constituted outside its physical being by its image”

The space for creation plays a part in the maturing and hatching of artistic works. Materialist and environmental artist M.O.A.L , articulations have been creating global noise on the streets and in various establishments in South Florida. Artistic visualizations at conception is profoundly rooted in the lifeblood of modern culture; therefore space is not neutral to the artist for all places are impregnated by fantasies of our world. The active construction of the work, is an act of transformation in which the artist searches to displace and overstep the material, time and space.

My painting is rooted in accumulation of units, multiple layers of paint and time with endless patience. My unique approach to expressionism and abstraction parallel in a free radical way which coexist and Evolving, from my spiritual, intellectual and emotional side of humanity pave the way for my philosophically inclined body of work .Communicate locally, globally and in conversations via socially relevant themes. My material normally are found shipping pallet or steel drums An encounter with, Half-man, half-Ape aka M.O.A.L will occupy your brain and soul forming a revolutionary Movement of the People.